We are 150 meters away from Pituba, a street that concentrates the movement of bars, restaurants and shops, and 600 meters from Concha Beach, at the meeting of the river with the sea 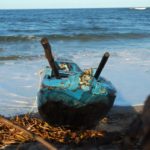 Located on the Cocoa Coast, the city of Itacaré was originally an indigenous village that lived on hunting, fishing and subsistence farming. It was the Portuguese and Jesuit colonization that built a chapel and baptized the population as São Miguel da Barra do Rio de Contas. Later, in 1723, the Mother Church and the Jesuit House were built, and nine years later Itacaré became a municipality. Only in 1931 it changed its name to its current denomination: “itacá” (noisy river) and “ré” (different). 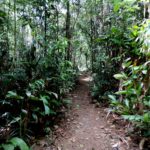 Itacaré is famous for its abundant Atlantic forest and cocoa cultivation, a production that due to its requirements helped to maintain the native and unique forest of the region. With over 15 stunning beaches, trails in the Atlantic rainforest, the Rio de Contas that crosses much of Bahia to go out to sea on the edge of the city, waterfalls and streams all along, Itacaré is not only nature, but also history, native culture and nightlife. Pituba and Passarela da Vila, the main streets of the tourist movement, concentrate most restaurants, bars and various shops and activities. 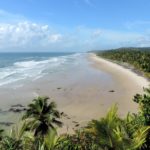 We are 233 km from Salvador (via ferry in Bom Despacho), 370 km from Porto Seguro and only 70 km north of Ilhéus. To arrive by plane, these three cities have national and international airports. By car, access is by BA-001, Brazil’s first ecological road in its stretch between Itacaré and Ilhéus (APA Serra Grande – Itacaré). There are also bus services operating regularly to get from any of these cities..